In the world of professional sports, there are always players for whom the pressure and notoriety lead to (or exacerbate) mental health issues. Billiards is certainly no exception to this fact, and throughout modern times and history alike billiard players have burned out, turning to drink or drugs or, if they are lucky, simply understanding their needs and bowing out of the game. Luckily, to my knowledge at least, only one of them has ever been driven clinically insane.

In the early years of the 1900s, in the famous W.P. Mussey’s pool hall of Chicago, the instructor Lanson W. Perkins was teaching a pupil by the name of Calvin Demarest a long bridge that he was sure would benefit players around the globe. Perkins drilled Demarest for almost a year on the fundamentals until finally Demarest was let loose to play in tournaments. 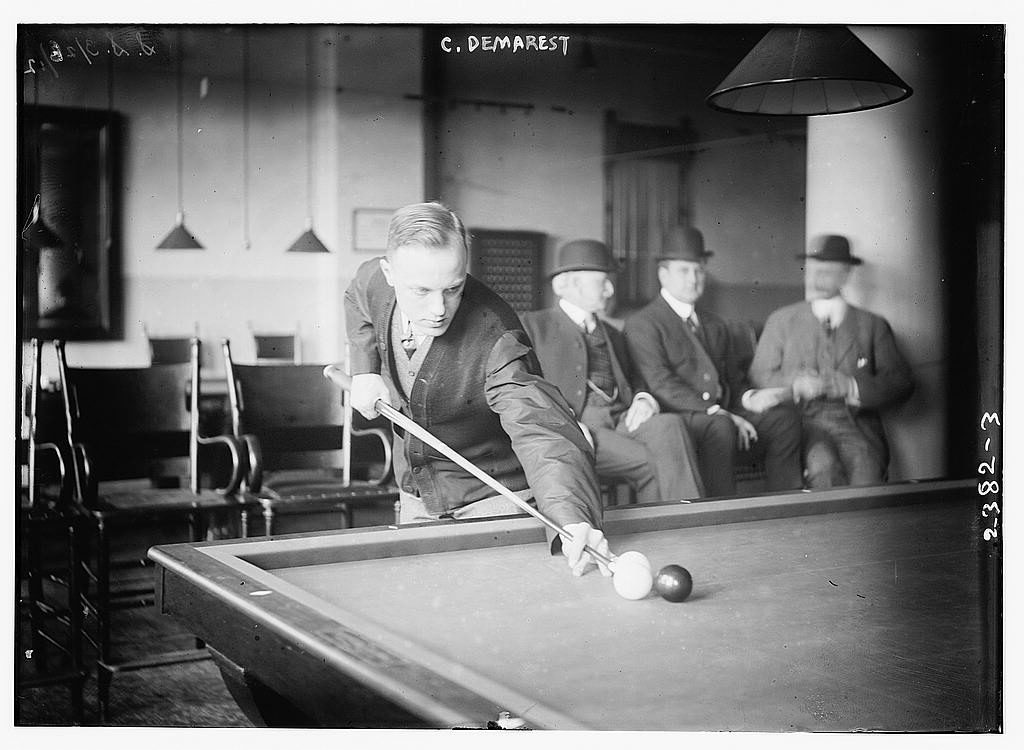 Demarest dominated the events. At his 1905 debut tournament at Mussey’s room, he won every game and made the highest run, single average, and general average. As his later matches would show, Perkin’s training had paid off. However, as Demarest picked up win after win, his relationship with Perkins would turn South. Demarest, known for having a hot temper, knew that he had surpassed his teacher and became frustrated with Perkins, leading to several quarrels and eventually their separation.

At the professional level, Calvin Demarest’s style didn’t impress everyone. In his obituary, the Chicago Tribune noted,

although his play at times was brilliant, he did not advance consistently.

Covering his 1909 match against George Sutton, a writer for the Brooklyn Daily Eagle wrote,

Demarest played what is known as ‘crazy’ billiards… Demarest paid no more attention to tourney billiard standards than a non-competitor. He slammed the balls around, showed wonderful execution and was lucky.

Of particular note to the writer was Demarest’s confidence. He was making shots that no more skilled player would dare to even try.

Still, the crowd loved him for it. For each incredible jump shot he made, the audience cheered. Bookmakers at the event offered to back him against anyone in the world for $5,000. What’s more, he won. As the writer himself had to admit, George Sutton “had no chance.”

While he may have been doing well on the table, behind the scenes, Demarest was starting to crack. He began experiencing hallucinations, often featuring his wife, including one in which she robbed him. Demarest was not unaware of his troubles. He had discussed retirement from the world of billiards, bringing up the possibility of making a new life for himself somewhere quiet.

Unfortunately, he never got the chance. On June 16, 1915, he snapped. Calvin Demarest, using a pocket knife with a 2” blade, stabbed his wife repeatedly in the throat, seriously wounding her. He then turned the knife on himself, and tried, unsuccessfully, to slit his own throat. His mother, Ida, tried to restrain him. Luckily, she received only minor cuts to the hand.

The once-promising young star had suddenly come crashing down. Deemed unfit to stand trial, Demarest would spend the rest of his life at the Elgin Asylum for the insane. Though a false report of his death would come out the next year, he lived to be only 39, dying on June 12th, 1925.