OnCue: The E-J5 and its Teddy Bears

If the D-23 and its colored rose hinted at a new art direction the company was taking, the E series was the destination. Launched in 1990, the E series included an extensive selection of cues with a wide variety of representational, inlaid art. Some of the more interesting examples included cats, hot-air balloons, a dragon, and a penguin wearing a rad pair of shades. 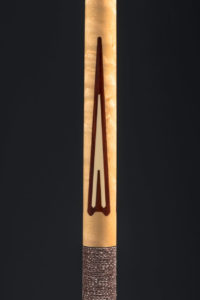 One of the more unusual cues in the series is the E-J5. The cocobolo sleeve of the E-J5 features three connected ovals, each with a unique teddy bear inside. One is outfitted as a sheriff, another wears a red tie, and the last wears a top hat and bowtie.

The bears, like other artwork in the E series cues, posed a bit of a challenge to create. While most inlaid artwork is cut flat and rounded after it has been inserted into the cue, the width of the bears required them to be cut to match the radius of the cue.

The E-J5 was one of a series of cues dreamed up by Jim McDermott’s daughter, Phyllis. She was eager to attract more women into the sport, and created a handful of cues for that purpose. Although the E-J5 doesn’t appeal to everyone, it’s hard not to appreciate the impressive handiwork and thought that went into it.

The post OnCue: The E-J5 and its Teddy Bears appeared first on McDermott Cue Blog.