Wander around our showroom long enough and you may just happen to take your eyes away from the cues, pool tables, shuffleboard tables, and games long enough to notice a few of the paintings, pictures and posters adorning the walls. One of these, located on the South end of the room near the checkout counter, is a poster featuring every single one of the D-Series cues lined up next to each other on a pool table. Look closer and you’ll notice that these are not your everyday D-Series cues; they’ve each been customized with a grey stain and leather wrap. 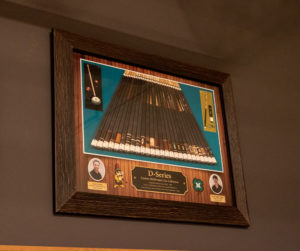 The poster hanging in the McDermott Showroom

The cues on the poster belong to McDermott collector Danny Rogers. He took up pool in the early 1980s during his time in the US Air Force. While stationed at Lackland, a fellow airman let him play with his D-4, and convinced Danny to pick up a McDermott cue of his own. He found himself a D-2 at a local dealer. Eventually, he traded up to a D-13, and then his D-Series infatuation really began.

Danny set his mind on collecting every model of the D-Series, and would search classifieds (and later websites) looking for the models that he didn’t yet own. When he finally completed his collection, he sent it in to us to be refurbished into a matching set, with each getting a grey stain and leather wrap.

When the cues arrived at the McDermott factory, our lead customer service representative Jayme worked with Danny to get him what he wanted.

“This was the first complete D-series refurbishing project to my knowledge” explains Jayme. “He is a huge McDermott fan and loves the D-series. It was his idea to collect the entire set and then have them all match with the same grey stain color and black lizard leather wraps.” 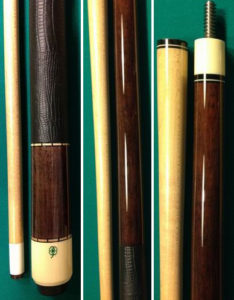 In fact, even a few of the cues in the series that feature exotic woods received the stain, going against the conventional wisdom that exotic woods do not always take stains well. Danny was thrilled with the results.

“The D-3 was always my least favorite of the 26 cues in this series. Seeing this finished cue [after staining] has changed my mind.”

Danny was so pleased with his refurbished D-Series that he worked with McDermott to design a poster for the collection. But, he isn’t finished yet. Starting with some extra D-Series cues that he received in various trades and auctions, he recently finished collecting another complete set of D-Series cues. For this next collection, he intends to send them in and have them stained a different color.

Although he was the first to send in a complete D-Series set for refinishing, Danny’s story is one we hear often. Collectors all over the world send in their McDermott’s to give them new life with custom wraps, stains, modern shafts, or even simple restorations to factory-new condition. You can learn more about Danny’s collection at his website, and learn more about the services we offer on our Repairs and Refurbishing page.

McDermott Announces Cue of the Month Giveaway for March 2020